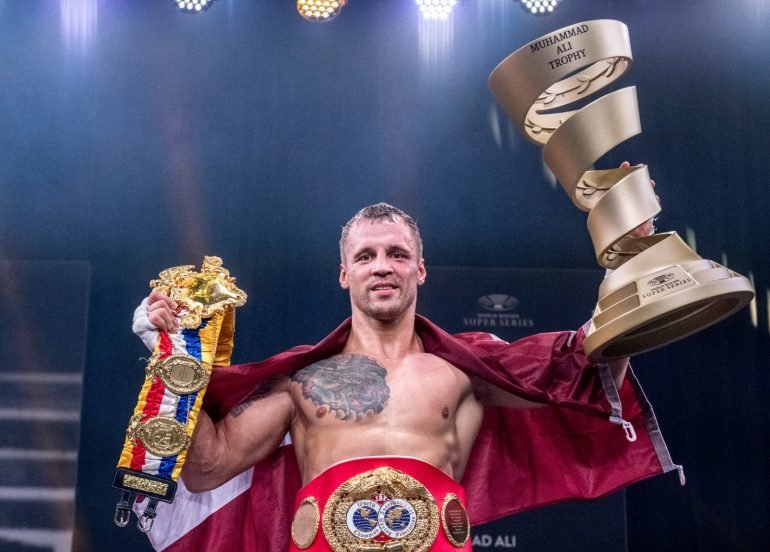 The 35-year-old Latvian said he was thinking of following in Oleksandr Usyk’s footsteps by moving up to heavyweight after winning his second cruiserweight title by majority decision in the World Boxing Super Series final.

Usyk handed Briedis his only defeat, a close majority decision in January 2018.

“I’m considering moving to heavyweight,” Briedis said. “But now I’m going to rest for a bit before I make any decisions.”

He got a break. He clearly outperformed his Cuban opponent, which is reflected in the two scorecards 117-111. The third judge scored it 114-114.

“It feels great to win the Muhammad Ali Cup, it feels like a dream,” he said. “Me, my team, my family have waited so long for the trophy. Thank God we did, and I’m so happy about it.”

He continued: “In the first round I felt how dangerous Dorticos was, but I got used to his style, and in the following rounds we didn’t risk too much, we just put in what we had prepared. I am very satisfied with my performance.

“… I hope I produce a fight for the Latvian fans to be proud of me. The fans can’t be in the arena, but at least through TV I hope to bring their emotions.”

The loss to Usyk was an emotional setback for Briedis (27-1, 19 KOs). Who knows? Maybe he’ll get another crack at his rival in the sport’s glamor division.

“I fell after Usyk’s fight,” he said. “Usyk was better that night, and rightly so. But looking back I can see that a lot of things around me and in my team have changed. And things have gotten better since that fight.

“I really don’t know if I would have won that night if my career would have progressed the way it is today.”